Nelsie's daughter Wells Stevenson is continuing the tradition of making custon, one-of-a-kind pieces of artwork. The artwork with the Nelsie Davis stamp is guaranteed to be a personal, treasured piece of jewelry to last generations. Her trademarked earring wires are sturdy, comfortable and long wearing. 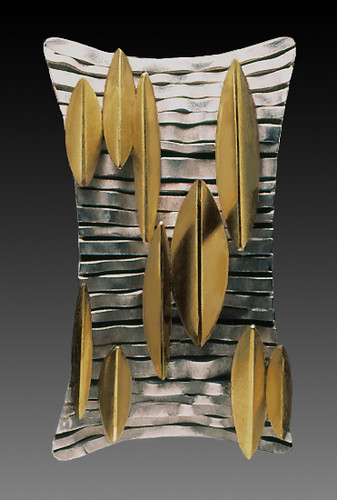 Nelsie Elizabeth Davis passed away on November 13, 2015 surrounded by her children and family.

Nelsie was born on September 16, 1947 in Tacoma, Washington the third of four children of Virginia and Nelson Davis of Lakewood, Washington. She attended school in both Tacoma and California. After graduating from Katherine Branson School in Ross, California in 1965, Nelsie attended Boston University School of Fine and Applied Art from 1965 – 1970 graduating with a BA in Sculpture. It was in Boston, under the tutelage of renowned goldsmiths Vincent Ferrini and Barbro Ullander, that Nelsie was to gain her lifelong love of working with sheets of gold.

In 1976 Nelsie moved to White Salmon, Washington and although she lived there the rest of her life she continued to exhibit her work in Portland, Oregon and continued to be involved in the Northwest art community. Nelsie was on the Board of Contemporary Crafts Association in Portland, Oregon from 1977-1982. She began exhibiting jewelry at Anne Hughes Gallery in 1975 and 1976 moving on to more regional shows at the Tacoma Art Museum (1978) and both the Henry Gallery (1977) and Foster/White Gallery (1978) in Seattle. In 1979 Nelsie’s jewelry was exhibited in the “Washington Open” at the Seattle Art Museum.

In 1980 Nelsie was awarded a National Endowment for the Arts grant for achievement in jewelry design. She chose to use the funds to build a new jewelry studio in White Salmon, Washington, where she crafted one of a kind hollow form gold and silver earrings and necklaces. For many years her work was available at fine art shops like “Twist” and “Manor” in Portland, Oregon under the name of Nelsie Davis Jewelry. Nelsie also loved working with clients and collectors on individually designed pieces. Many of these clients became life long friends and who regarded her jewelry pieces as their “Nelsie’s”.

A celebration of Nelsie’s life and artwork will be held in Portland, Oregon in the summer.